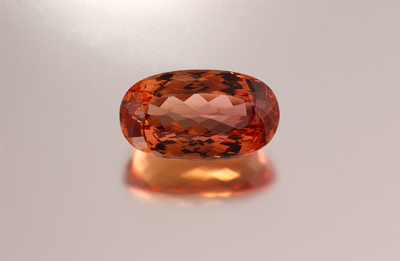 Since topaz was recognized as more than just a yellow gem, it has become fairly common and therefore rather inexpensive. It can be judged along the same parameters as diamonds. In fact, colorless topaz is increasingly popular as an inexpensive diamond alternative.

When buying topaz, realize that this gem is most often treated with irradiation to produce desirable colors—particularly blue. Because these processes so closely resemble how topaz forms in nature, there is practically no way to determine whether a stone has been treated.

Topaz crystals have yielded some of the largest gemstones ever cut. Mines in Brazil produced both the world’s largest cut blue topaz (the “Brazilian Princess,” weighing 21,327 carats) and the largest cut yellow topaz (the “American Golden Topaz,” weighing 22,892.5 carats).Imperial topaz is the most highly prized for its intense reddish orange color. Yellow, orange and brown stones are more common and less expensive—although these can be treated with heat to enhance the pink and red hues.

In smaller sizes, this gem is fairly inexpensive. Not only is it affordable, but also available in such a wide range of colors, that it’s easy for everyone.